Are DUI Checkpoints Legal in Arizona? 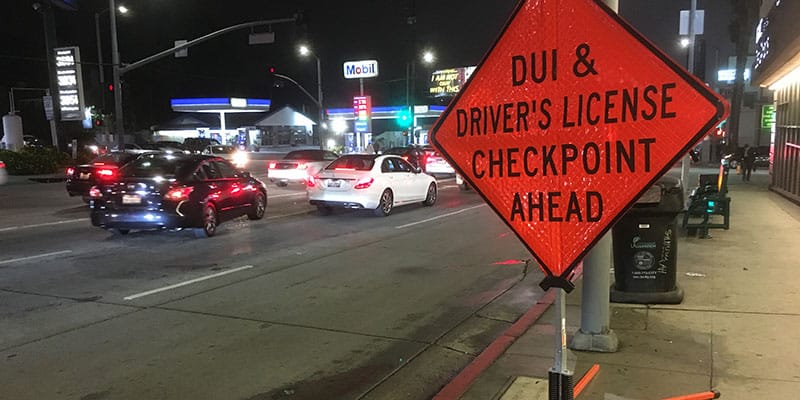 Removing drivers who are under the influence off of the road is a key goal for law enforcement authorities in Arizona. However, officers are required to respect certain rights of motorists when they conduct traffic stops, including having a reasonable suspicion that the motorists have engaged in illegal activity or are doing so before they can pull them over. To stop a driver for a suspected DUI, an officer must observe some type of indicator that the driver might be intoxicated or is driving dangerously.

DUI checkpoints, or sobriety checkpoints, allow police officers to stop vehicles without first observing any indication of dangerous or intoxicated driving. While this might seem to contradict the general rule for police officers and their requirements for stopping drivers, DUI checkpoints in Arizona have been found to be constitutional as long as they are conducted properly.

Police officers must carry out checkpoints under an advanced plan that provides neutral and explicit limitations on the actions of the officers. This is to prevent police from making pretextual stops on the basis of race. The courts believe that taking away the officers’ discretion about which vehicles to stop at a DUI checkpoint can reduce the likelihood that motorists will be chosen based on an officer’s biases.

What Makes a DUI Stop or Checkpoint Legal?

Under normal circumstances, a police officer will need to have a reasonable suspicion that you have violated the law before he or she can pull you over. This suspicion cannot be an inarticulable hunch. Instead, the officer must observe you engaging in some type of activity that makes him or her reasonably suspect that you have violated the traffic laws or are driving drunk.

We are Open and Available to answer any questions. Free consultations by phone or video chat. Shah Law has successfully defended over 2,700 clients. We are on your side!

Common reasons why a police officer might pull you over on suspicion of DUI include swerving, weaving, driving below the speed limit, late braking, and other similar driving issues. An officer might also pull you over for an unrelated traffic offense and subsequently develop reasonable suspicion that you are under the influence while talking to you.

Checkpoints are an exception to this rule, and they are legal as long as they meet the requirements established under the law. Checkpoints must be set up and carried out in a way in which all motorists who pass through are treated equally. Officers are not allowed to pick someone to stop based on how they look or the vehicle that they are driving.

These requirements are meant to prevent officers from illegally profiling motorists. As a driver, you should understand your rights when an officer stops you at a DUI checkpoint.

How Does a DUI Checkpoint Work?

Before a law enforcement agency can establish a DUI checkpoint, a plan must be created. This plan should explicitly identify which drivers will be stopped as they drive through the checkpoint on a random basis. For example, a plan might include stopping every fifth or 10th car.

Checkpoints must be published in advance to notify the public. They must also be clearly marked so that drivers know that they will be entering a DUI checkpoint area as they approach.

Checkpoints are areas in which officers stop vehicles according to the plan and check for signs of intoxication. Typically, a DUI checkpoint will be set up during the holidays and around areas where many people might be drinking, including sporting events and concerts.

However, checkpoints can be set up nearly anywhere. People can search online to find lists of DUI checkpoints that have been held in the past.

While they are talking to you, they will be looking for indicators of intoxication. These indicators might include bloodshot eyes, slurred speech, a smell of alcohol, nervousness, and others. If the police officer believes that you show signs of intoxication, you may be asked to pull your vehicle to the side so that standardized field sobriety tests can be performed.

If the officer believes that you failed the SFSTs, you may be taken into custody and transported to the police station or jail to undergo breathalyzer testing or a blood draw and be charged with a DUI.

While the COVID-19 pandemic has impacted nearly every area of life, law enforcement officers in Arizona continue to aggressively enforce the state’s DUI or DWI laws. The goal of these laws is to reduce drunk driving and to save lives.

The only difference that COVID has brought to checkpoints is that police officer should wear masks and gloves, and they will make their observations from a safe distance while observing social distancing rules.

Do I Have to Drive Through a DUI Checkpoint, or can I Turn Around?

When you see a sign that says a sobriety checkpoint ahead, you might wonder whether you can turn around to avoid it. It is not illegal for you to turn off on a side street or into a parking lot to turn around in the opposite direction. However, you can be stopped if you make an illegal turn before reaching a checkpoint.

For example, if you complete a U-turn in an area where there is a “no U-turn” sign, turn in the wrong direction in a turning lane, or drive through a median to avoid a DUI checkpoint, you can be pulled over even though you did not enter the DUI checkpoint.

If you turn around in a way that does not violate traffic laws, you cannot be pulled over. The police do not have probable cause to stop your vehicle simply because you avoided a DUI checkpoint.

If you are stopped because you turned around legally, your attorney can argue that the police did not have reasonable suspicion to stop your vehicle and potentially secure the dismissal of any charges against you.

Do I Have to Perform a Sobriety Test? What Happens if I Refuse?

If you are ordered to step outside of your vehicle, follow the instruction. However, lock your vehicle as you get out unless the officer explicitly orders otherwise.

The officers will ask you to perform standardized field sobriety tests. These are a series of tests that are given to help officers build probable cause to arrest you for a DUI offense.

While the officer might seem insistent that you must perform these tests, you have the legal right to refuse to do so. These tests include the walk-and-turn, one-legged stand, and horizontal gaze nystagmus tests.

You are also not required to submit to a preliminary breath test on the side of the road. By refusing these tests, you simply remove the officer’s ability to claim a reason for your arrest and provide testimonial evidence against you at a trial about your performance on the SFSTs. Refusing the SFSTs cannot be used against you in your DUI case.

If you refuse the SFSTs, the officer might take you into custody anyway. You might be asked to undergo a breath or blood test to determine your blood alcohol content or the content of another substance the officer suspects that you are under the influence of.

Under Arizona law, all drivers are deemed to have impliedly consented to breathe or blood tests to detect the presence of alcohol or drugs. If you refuse these tests, you will lose your driving privileges. Your refusal may also be used against you in your DUI case.

Get Immediate Assistance from the DUI Attorneys at Shah Law Firm

If you have been charged with a DUI after being stopped at a DUI checkpoint, you should talk to an experienced DUI defense lawyer at the Shah Law Firm. We can review your case and help you to decide the best path forward.