Arizona Open Container Charge. Can You Beat It? 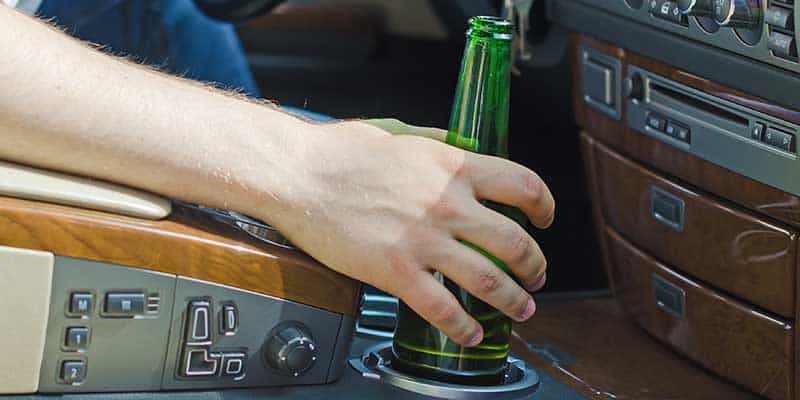 In addition to prohibiting driving while impaired by alcohol or DUI drugs, Arizona also has an open container law. Motorists are not allowed to have open containers of alcohol in their cars.

If the police pull you over and see an open alcohol container in your vehicle, the officer can charge you under the state’s open container law.

You cannot defend against this charge with the fact that you were not consuming alcohol from the container while driving.

The police can also charge you with violating the state’s prohibition against open containers of alcohol even if you are an adult over the age of 21. If you are facing this type of charge, an attorney at the Shah Law Firm is prepared to help defend you.

What is the Arizona Open Container Law?

The Arizona open container law is found under statute ARS 4-251. This statute prohibits you from having an open container of alcohol anywhere in the passenger compartment of your vehicle. Open containers include cans or bottles of alcohol that have been opened or have had some of their contents removed, including beer, malt liquor, mixed drinks, spirits, or wine.

You cannot be convicted of this offense for transporting unopened alcohol bottles from a store as long as their seals have not been broken.

However, if you order a bottle of wine at a restaurant, you could face charges if you bring the remaining wine home by transporting the corked but open bottle in your passenger compartment.

What are the Arizona Penalties for Violating the Open Container Law?

Are There Exceptions for Ride-Share Passengers?

You cannot be charged for having an open container if you are a passenger in a limousine, taxi, or transportation network company vehicle.

Transportation network companies are defined in ARS 28-9551 as companies that have been licensed in Arizona to connect drivers and passengers for rides via a digital network. This definition incorporates all ride-share companies that have been licensed by the state, including Lyft or Uber. The police should not charge you with violating the state’s open container law if you have an open container of alcohol with you when you get a ride through a ride-share service.

A police officer should also not charge ride-share drivers when their passengers have open containers in their vehicles while being transported. To avoid potential problems, make sure your passengers always ride in the back. If you are still charged, you should reach out to a Phoenix defense lawyer as soon as possible.

Can You Be Charged with Both an Arizona DUI and an Open Alcohol Container Violation?

If you are caught with an open container of alcohol and are under the influence of alcohol, the police can charge you with both a DUI and an open container offense. Under ARS 28-1381, you can be charged with a DUI whenever you are impaired to the slightest degree by alcohol or have a blood alcohol concentration of 0.08% or higher within two hours of driving or being in actual physical control of a vehicle.

If a police officer pulls you over and sees an open container of alcohol within your reach, he or she will likely suspect that you might be under the influence. You might then be asked to perform standardized field sobriety tests and be placed under arrest. After getting to the police station, the officer might ask you to submit to a breath or blood test.

Depending on the officer’s observations of you and the results of your chemical test, the prosecutor might charge you with both an open container offense and a DUI.

If you are convicted of both a DUI and an open container violation, you could face sentences for each offense.

Can Passengers Be Charged with an Open Alcohol Container in Arizona?

If you are a passenger in a vehicle other than a taxi, limousine, or ride-share vehicle, you can be charged with an open container violation if you have an open container of alcohol with you. There is no exception under this law for passengers of regular vehicles.

Drivers who have passengers with open containers of alcohol can also be charged for violating the open container law. However, if a passenger seated behind you has an open container of alcohol that you did not know about, you might be able to defend against this type of charge based on your lack of knowledge.

Is there a Minimum Amount of Alcohol for the Arizona Open Container Law to Apply?

The open container law does not list an established minimum amount of liquid. Instead, it makes it a crime to transport open containers of alcohol with broken seals or that have had portions of their contents removed.

You could face charges under this statute even if there were only a small amount of fluid in the open container.

Where Can You Carry Open Alcohol Containers in Arizona?

The open container law includes exceptions for carrying open containers of alcohol in your trunk, inside of a locked glove box, or behind the last seat in a vehicle without a trunk.

For example, if you buy a bottle of wine at dinner and transport the remainder home in your trunk, you should not be charged with violating the open container law.

What Should You Do if You are Pulled Over with an Open Alcohol Container in Arizona?

The best advice if you have an open container of alcohol is to put its cap or cork back on and secure it. Then, place it in your trunk, locked glove box, or in the space behind the last seat of your vehicle.

The officer may then use the presence of the open container to conduct a DUI investigation and search your vehicle.

Whenever you are stopped by the police, you should provide your driver’s license, name, insurance, and registration. However, it would be best if you did not answer any questions. Politely decline to answer questions and tell the officer that you are choosing to invoke your right to remain silent.

You can also tell the officer that you want to have an attorney to represent you and for them to be present during any questioning. Prosecutors and police officers can use anything you say against you, so politely refusing to answer questions is important.

Can You Defend Against an Open Container Charge?

Being charged with a violation of the state’s open container laws does not mean that you will be convicted. Instead, the prosecutor is required to prove each of the elements of the offense beyond a reasonable doubt before you can be found guilty.

Your Phoenix defense lawyer will work to establish reasonable doubt and defend you against your charge. The circumstances of what happened will dictate the defense strategy your attorney might choose.

Some of the possible defenses might include the following:

There might be other defenses available to you. Your Phoenix defense attorney will carefully review the police reports and other evidence to identify the best defense strategies to take to expose flaws in the prosecution’s case and secure a reduction in your charges or an outright dismissal.

Most people think that open container charges are not serious. However, a conviction for having an open container of alcohol in your vehicle can result in a class 2 misdemeanor on your record and a potential sentence of up to four months in jail and a $750 fine. Being sentenced to jail could also result in job loss and trouble finding new employment.

When you get help to fight against an open container charge from an attorney at the Shah Law Firm, your lawyer might be able to build a strong defense case and convince the prosecutor to dismiss your charges.

Your attorney might also be able to negotiate a plea offer for deferred prosecution or reduced charges. To learn more about how we might be able to help, call the Shah Law Firm today at (602) 560-7408.